A lawsuit filed in federal court alleges that the at-large voting system of the Town of Islip violates the Voting Rights Act by systematically preventing members of Islip’s Latino community from electing candidates of their choice to the Islip Town Board, despite the strength that the Latino community would have as a voting bloc under a system of single-member districts. Attorneys from Paul, Weiss, Rifkind, Wharton & Garrison LLP, the Law Offices of Frederick K. Brewington, and Newman Ferrara LLP filed the lawsuit on behalf of Ana Flores, Rene Flores, María Magdalena Hernández, Magali Roman, Make the Road New York, and New York Communities for Change against the Town of Islip, the Islip Town Board, and the Suffolk County Board of Elections.

“As a long-time resident of Islip, I’ve seen time and again how the Town Board has treated the Latino community like second-class citizens,” said María Magdalena Hernández, plaintiff in the case and member of Make the Road New York. “They have repeatedly failed to provide interpretation and translation to Spanish-speaking residents like me. They have ignored our requests for cleaner streets and safer roads. And they make us feel unwelcome. Until our community can elect a representative of our own, the Town will never listen to us.”

The plaintiffs allege that the Town’s at-large voting system should be replaced with single-member districts because, under the current system, the Town Board has been unresponsive to the needs of the Latino community and repeatedly failed to afford Islip’s Latino residents the same rights and services that it provides to more affluent white communities. For example:

● The Department of Public Works ignores requests to repair potholes, traffic lights, and stop signs in Latino neighborhoods
● The Town fails to provide proper public services (such as street cleaning, garbage pickup and snowplowing) on an ongoing basis in the Latino community, while ensuring that white communities are given priority access to these same services
● The Town has repeatedly failed to provide translation and interpretation services to Spanish-speaking residents
● Latino residents are often met with hostility or indifference when they ask local law enforcement and municipal services for help

“The Town handles complaints from our neighborhoods differently than it handles complaints from other parts of Islip,” said Magali Roman, another plaintiff in the case. “When people in the Latino community call to report streets that need to be repaired, the Town does not respond to us. When these problems are not fixed, accidents happen, people’s cars break down. They might miss work and lose their jobs, or they might be hurt. These problems start out small, but because the Town neglects them, they grow and have big consequences.”

Although Latinos make up approximately one-third of the Town’s population, no Latino has ever been elected to the Islip Town Board. Further, in the last three decades, only one of the 30 residences belonging to elected Town Board members was located in the Latino community; the single residence located in a Latino community belonged to a Republican Town Board member who owned three residences. The plaintiffs allege that Islip’s Latino residents are a politically cohesive community that has demonstrated the ability to elect candidates of their choice when an at-large system does not dilute their votes, and has succeeded in electing Latino candidates to county and state Legislature seats.

Currently, all Islip residents vote for each Town Board position, meaning that the same majority can control the outcome of the race for each Town Board seat. As a result, Islip’s Latino community has little chance of electing any candidate of its choice. The plaintiffs argue that the current at-large system should be replaced by a single-member system, in which the Town would be divided into separate districts with one council member representing each district, as is the case in Long Island towns such as Hempstead, North Hempstead and Brookhaven.

In support of their argument for a district-based system, the plaintiffs highlight the Roberto Clemente Park dumping incident as an example of the Town’s neglect of the Latino community.

In 2013, two politically connected companies began dumping tens of thousands of tons of toxic waste, including asbestos, into the park located in the heart of Islip’s predominantly Latino neighborhood, Brentwood. Town officials knew of the dumping at the time. Rather than alerting law enforcement and the community of this illegal and dangerous activity, they concealed evidence that the dumping had occurred. These Town officials were later criminally charged and pled guilty.

The Latino community’s problems with Roberto Clemente Park endured. Following the dumping, Town officials failed to promptly close the park and notify local residents of the incident. In addition, the Town failed to provide adequate translation services at a town hall meeting intended to explain the dumping to Islip’s Latino residents. The park did not reopen until 2017, leaving the Latino community without its main center for recreation and community for three-and-a-half years. When the park eventually reopened, construction was not complete and many were concerned whether the park was safe for children. Moreover, the nearby pool, which had been closed in 2011, has still not been reopened.

“The pool at Roberto Clemente Park has always been an important place for me, my family, and my community,” Ana Flores, a member of New York Communities for Change, said. “It is our pool. Our pool has been closed more than five years and it’s still closed. Because of the Town’s neglect, my brother didn’t grow up with the same pool that I grew up with. The Town’s behavior is unacceptable and would never be accepted in the rich, white communities that the Town rushed to help in the wake of Hurricane Sandy.”

The Town’s discriminatory zoning and land use practices have also permitted the industrialization of large tracts of Central Islip and Brentwood, often in close proximity to residential developments, which has impacted the health of Latino residents. Brentwood and Central Islip are home to a disproportionate number of environmental hazard and waste sites, including Superfund sites, that are located right inside residential areas; these sites are not well-maintained, posing serious risks of contamination of water sources and other community resources. As recently as 2015, the Town disregarded the health and safety of Brentwood residents by fast-tracking approvals for the establishment of a scrap metal recycling facility and metal shredder near a neighborhood, despite opposition from the Suffolk County Planning Commission and the community.

“In 1988, then-Supervisor Frank Jones said the representation of the Latino community in the Town was ‘not in proportion to the influential numbers growing in the in the community. We need to do more,’” said Fred Brewington, The Law Offices of Frederick K. Brewington. “Since then, the Town has done absolutely nothing to remedy this situation and has turned its back on its Latino residents.”

“By filing this lawsuit, the Latino residents of the Town of Islip are making it clear that they will no longer be relegated to second-class status,” said Greg Laufer, Partner, Paul, Weiss, Rifkind, Wharton & Garrison LLP. “For the past three decades, the democratic process has been manipulated to maintain the one-party rule that perpetuated political corruption and the inequitable distribution of the Town’s resources.”

“When I became a citizen, I thought I would never be treated like a second-class citizen in my own country,” Ms. Flores said. “I was promised that — as a citizen — my vote could elect someone to represent me and my community. Here, in the Town of Islip, that promise has never been kept. And, so, today we sue to ensure our right, as citizens of this community, to elect board members who represent us!” 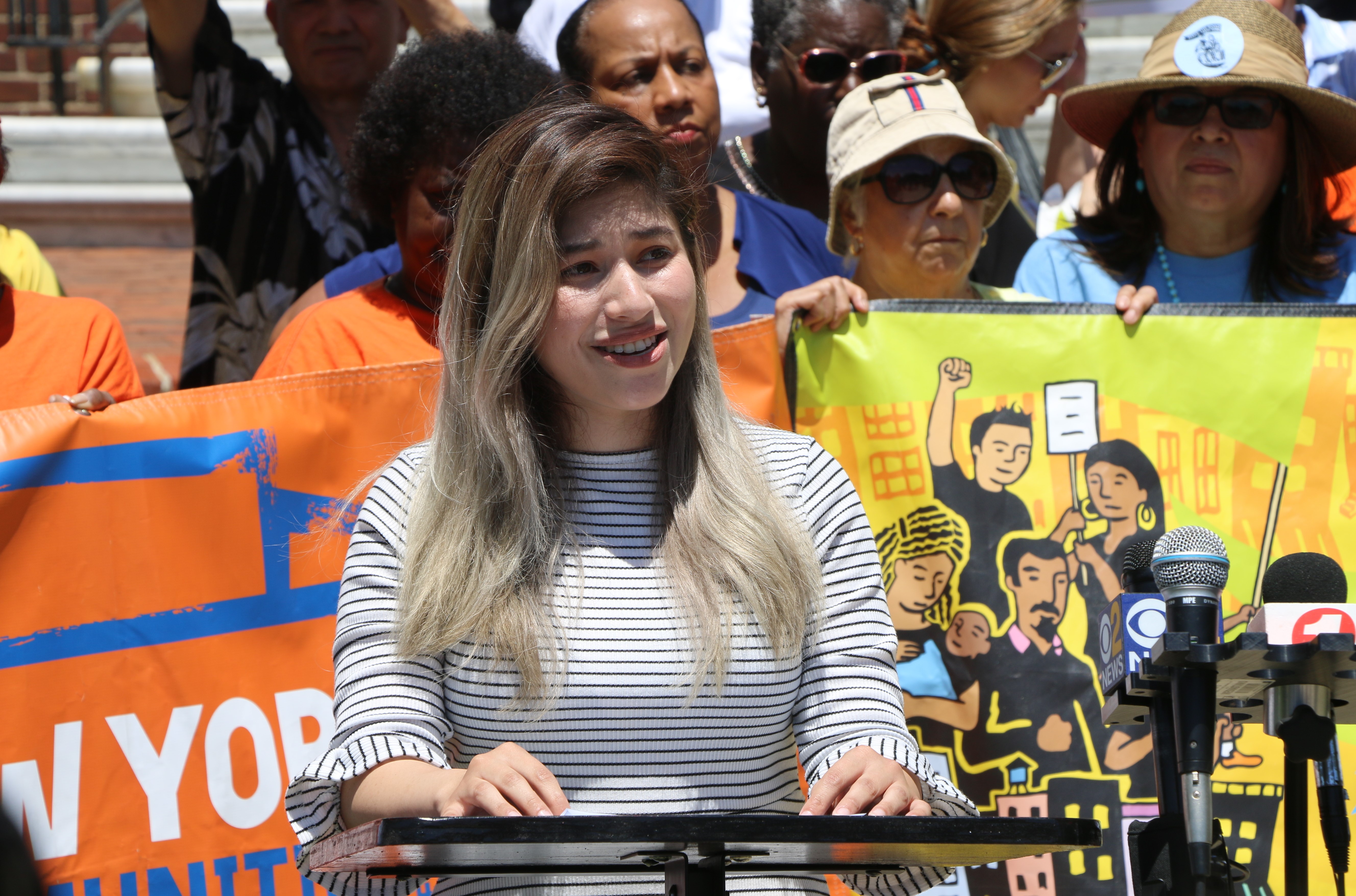 Pictured is Ana Flores, one of the plaintiffs in the Islip Town voting rights lawsuit, speaking at a press conference on June 19.